Home Gaming 25 most popular mobile games of the decade 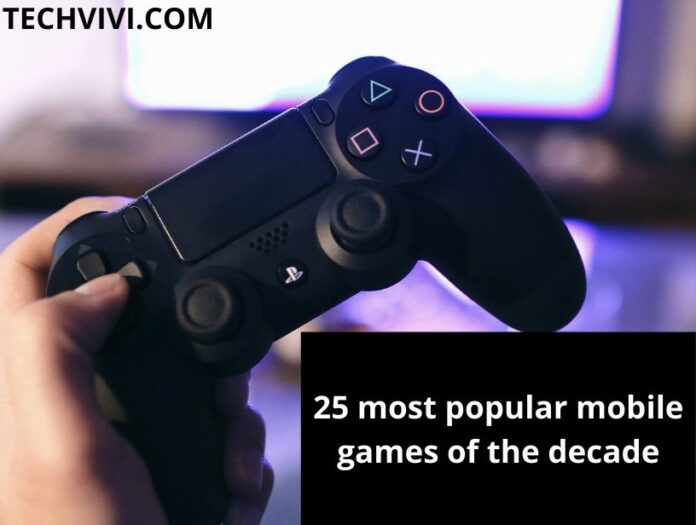 Want to know the most popular mobile games of this decade? Best mobile cricket game, best mobile video game, best mobile fighting game, etc. You are at the right place. Smartphones have changed the way we communicate since Apple released the first iPhone in 2007. And among the number of things smartphones provide gaming is one of them which is gaining attention these days. The tech has rapidly improved ever since, increasingly blurring the boundary between mobile gaming and traditional consoles. In the upcoming articles, we will cover details regarding the best gaming mobiles under 25000 and the best processor for gaming in mobile. In the recent survey that our team conducted we found out queries like which mobile processor is best for gaming? which is the best mobile processor for gaming in mobile etc, therefore we decided to bring up such topics in further articles.

Tom Peet told Newsweek: “From Call of Duty to Crossy Road, mobile games are an incredibly accessible entertainment source with enough gaming diversity to amuse and challenge everyone from hobbyists to experts.“The performance specifications of modern smartphones mean they’re able to act as powerful handheld consoles, and subsequently should be given more credit as respectable gaming devices.

The gap between traditional console and mobile gaming is increasing day by day.“Mobile gaming is often underrated and neglected in comparison to the hype surrounding PC and console gaming”.

But in recent times, phone gaming has gained attention due to advanced developments in androids and iOS.In this article, we will tell you about the 25 most popular mobile games that you can’t miss in 2021.

The first among the most popular mobile games is Hay Day. This is on Apple iOS in June 2012 and on Android mobiles in November 2013. This is a  freemium mobile farming game simulating the simple life of working the land.

The game is shown on the Google Play App as: “Build a farm, fish, raise animals, and explore the Valley. Farm, decorate, and customize your own slice of country paradise.”

This is a  free-to-play puzzle game developed by Playrix in 2017. In this gamers have to restore a sprawling old house.

This mobile game is regarded as “heartwarming” on Google Play while urging potential players, “What are you waiting for? Make yourself at home!”

This game was released in January 2019 by Lilith Games. This is a role-playing game with a unique aesthetic.

This game was released in late 2017. It promised to provide battle royale while out and about gave the game immediate appeal.

The official tagline of this game states: “Outrun, Outgun, Outlive. There is only one objective: to survive by hook or by crook!”

This is a fighting video game developed by Kabam for both iOS and Android in 2014.

A statement on Marvel.com states “Iron Man vs. Captain America! Hulk vs. Wolverine! Drax vs. Deadpool! The greatest battles in Marvel history are in your hands!”

Tsum Tsum is a very popular Disney puzzle game. It had more than 70 million downloads worldwide.

The name of the game is visible on the App Store as: “Collect, connect and pop Tsum Tsum based on the popular Disney Tsum Tsum plushes.”

This game is free-to-play and single-player. Coin Master was launched by Moon Active in 2018.

The game’s tagline on the Apple Store says: “Attack and Raid your Friends! Do you have what it takes to be the next Coin Master?”

This is a casual match-three game, made by Playrix in 2016. This is available on  Android, iOS, and Facebook.

Just like Homescapes in this game players have to solve match-three puzzles to “restore a wonderful garden to its former glory.”

This is a multiplayer online role-playing game developed by Netmarble at the end of 2016.

This game’s official site urges players to: “Join the Silverlight Mercenaries to begin a new chapter in history, and save the world from eternal darkness!”

The inventors of the legendary game Candy Crush arrived at the Soda Saga sequel in October 2014.

The incredible Roblox Mobile was released in December 2012. This allows users to make their own games and play games created by other users while on the go.

The game’s creators plug the app on the Google Play site: “Join millions of people and discover an infinite variety of immersive experiences created by a global community!”

The mobile version of the MMORPG Lineage game was released by NCsoft in June 2017. This became one of the most popular games of the decade.

The Lineage M site states: “Capturing the quintessence of Lineage (for PC) and relatively transforming its heritage, Lineage M … [has] rewritten the history of Korean gaming.”

Game of War: Fire Age is trolled on Google Play with: “Lead massive armies into epic battles against dragons, monsters, and players from around the globe in the most addicting, interactive strategy game.”

This MMORPG was developed by NetEase. This was released in 2015 and by the next year had grossed more than $800 million in China alone.

This game is inspired by the Chinese classical novel, Journey to the West. This mobile version of the popular game is presented with Q-style characters to boost a gaming environment.

Dragon Ball Z: It is a free mobile game by Bandai Namco on Android. This was available on iOS in 2015.

This game is a combination of elements of board games, collectible card games, and puzzles that proved potent to mobile gamers, especially when illustrated by stunning 2D visuals and animation.

The games on the Google Play store read: “Enter the Arena! From the creators of Clash of Clans comes a real-time multiplayer game starring the Royales, your favorite Clash characters, and much, much more.”

The mobile battle royale game Garena Free Fire is by Garena. This became the world’s most downloaded mobile game in 2019.

This game got the title of  “Best Popular Vote Game” by the Google Play Store in 2019.

This is a free-to-play tactical mobile game.  Delightworks made it.

Google Play Store describes the game as: “Players become Masters and together with Heroic Spirits, defeat enemies and solve the mystery of human history’s disappearance. It’s up to the players to form a party with their favorite Heroic Spirits–both new and old.”

This is a military competition mobile game. This is based on PlayUnknown’s BattleGrounds launched especially for the Asian market.

The game has not eliminated much of the blood, unlike the Chinese version. Gore, drops players into a battle royale in which 100 gamers face-off in a closed environment until just one remains alive.

This is a free-to-play addictive mobile game that involves swapping colored pieces of candy on a game board to make a match. This is created by King for Facebook, iOS, Android, and Windows Phone.

The official page of the game states: “Play Candy Crush Saga and switch and match your way through hundreds of levels in this divine puzzle adventure.”

This amazing reality mobile game is a collaboration between Niantic, Nintendo, and The Pokémon Company. This took the world by storm upon its release. It has more than 500 downloads worldwide by the end of the year.

The game’s official site states: “Catch, train, and battle wherever you are in the real world—with friends and your Buddy Pokémon!”

This is a fantasy-themed freemium mobile strategy video game.  It became available for iOS in August 2012 and then for Android a year later.

The game’s official site states: “Join the international fray that is Clash of Clans. The choice is yours in this millions-strong community of Barbarians.”

Puzzle & Dragons were created by GungHo Online Entertainment for iOS, Android in 2002. It had 50 million downloads by 2015.

Google Play store states the title as, “both an addictive and free match-3 puzzle game with classic monster-collecting RPG fun!”

This popular mobile Japanese role-playing physics game involves puzzle strategy. This is a multiplayer game. Released by Mixi in 2013.

This is similar to a cross between Nintendo’s Pokémon and Capcom’s Metal Walker. The game grossed more than $7.2 billion worldwide by October 2018.

The last among the most popular mobile games are Arena Valor. Often referred to as King of Glory, this is a multiplayer online battle arena. This is a very popular game of this decade.

In August 2021  this game faced adverse effects of its popularity, because of which  Tencent was forced to cut Honor of Kings playing time for minors.  The time was cut to one hour during weekdays and two hours on weekends. I hope this article helped you immensely in knowing the best popular mobile games that you can play. In the next article we will cover details regarding the best processor for gaming mobiles and the best programming languages for mobile games.