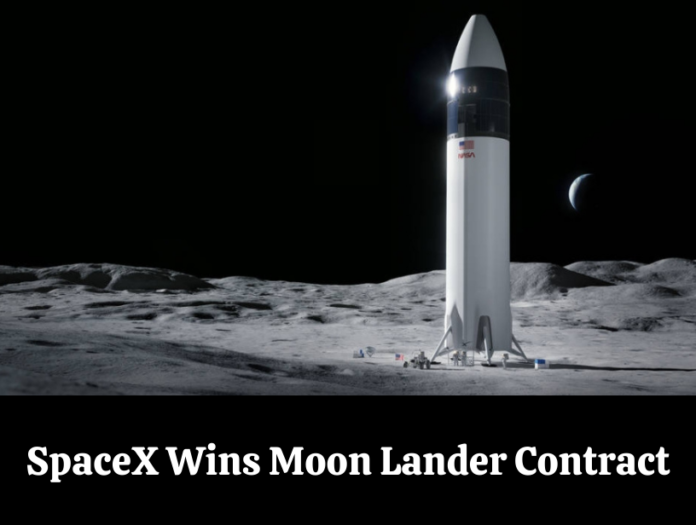 Nasa is taking humans back to moon. As part of the Artemis program, SpaceX has won the moon lander contract. SpaceX has been selected to send the first astronauts to the surface of the moon since 1972.

“Today I’m very excited, and we are all very excited to announce that we have awarded SpaceX to continue the development of our integrated human landing system “, said Lisa Watson-Morgan, NASA’s Human Landing System program manager. The contract is worth $2.9 billion. The company chose the Texas facility to test the prototype spacecraft. NASA has not sent any astronauts to the moon since Apollo 17 mission in 2017.

The Artemis Mission: Back to Moon

It is a U.S. funded international spaceflight program. The aim of the mission is to land the first woman and the next man after 2017 on the south pole region of the moon by 2024. It also aims to land the first person of color on the surface of the moon. For this mission, SpaceX has been selected to develop the first human lander.

Returning Humans Back to Moon

As SpaceX won the moon lander contract, it is all set to develop the first human lander.For their journey to lunar orbit, the Space Launch System rocket will be used to send four astronauts aboard the Orion spacecraft. For the final leg of the journey, two astronauts will shift to the SpaceX Human Landing System(HLS). The astronauts will explore the surface of the moon for a week and then return to the lunar Orbit. The astronauts with their colleagues will then come back to Earth by the Orion spacecraft.

SpaceX is developing Starship for this mission which is a heavy-lift rocket. The full rocket will consist of two pieces: a 230-foot-tall booster called Super Heavy, and a 165-foot-tall upper stage called Starship.

The company has designed the starship rocket  to carry large crews and cargo for deep space voyages. Four prototypes of the Starship rocket have been put to test till now. However, all of them have exploded.

Competitors for the NASA contract

Three teams were competing for NASA’s contract. They were Jeff Bezos’s Blue Origin, Dynetics, and SpaceX. SpaceX managed to win the contract. SpaceX also became the first private firm to send a crew to the International Space Station. Typically Nasa selects more than one company for a contract. However, Nasa selected only one company this time which is SpaceX.

According to industry analysts, SpaceX has proven to be the most trusted partner of NASA. “With this award, NASA and our partners will complete the first crewed demonstration mission to the surface of the Moon in the 21st century as the agency takes a step forward for women’s equality and long-term deep space exploration,” said Kathy Lueders, NASA’s associate administrator for Human Explorations and Operations Mission Directorate. “This critical step puts humanity on a path to sustainable lunar exploration and keeps our eyes on missions farther into the solar system, including Mars.” It is an ambitious mission and can cause a setback for NASA without a backup option. It is also an opportunity to send humans back to moon for the first time since the Apollo mission in 1972.