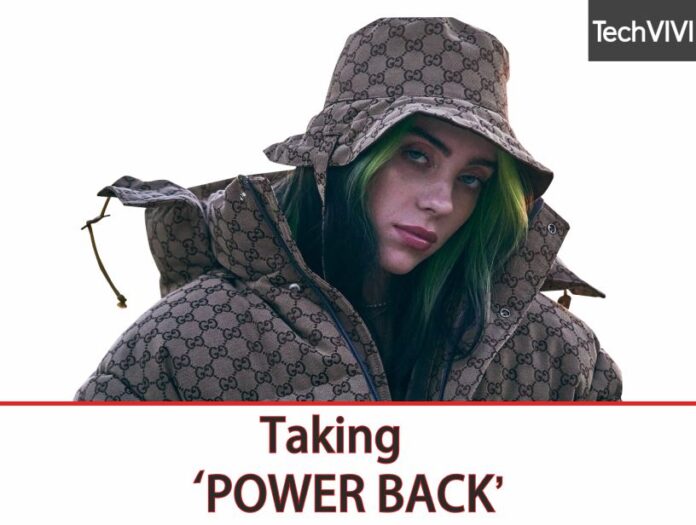 The heartthrob of pop -singing Billie Eilish is ruling the internet with her recently launched Vogue cover. “Your Power” singer Billie Eilish has officially gone full Marilyn Monroe on the cover of British Vogue’s June issue. From custom corsets to attractive accessories, the artist is taking her ‘Power Back’ in this new lingerie photoshoot.

Her ‘Power Back’ Photoshoot is ruling hearts on the internet

With having an eye towards only music Billie has never done anything like this before. Her new album ‘Happier Than Ever ‘ releases on 30th July. And hype for that has already been created through this lingerie photoshoot. Billie looks absolutely phenomenal in all the photos. But there is that one particular photo that is ruling over Instagram. Billie was wearing a custom trench and corseted bodysuit by Burberry. This bodysuit is accompanied by Mugler stocking boots and tulle gloves by Thomasine. Though the dress is not the main focus about which fans are getting mad. The large tattoo on her body is something that fans are currently freaking out about in the comments of her post.

Corset Photoshoot – An Answer to Trolls

Billie was sure about the trolls she was going to face regarding the undermining body positivity through this corset shoot. That is why before even the release of the shoot she herself made a statement in this regard. She posted on Instagram clarifying the fact that wearing a corset does not at all mean that she is defaming body positivity. In a way she explained the Your Power song meaning to the fans and potential trollers.

She made a statement that “My thing is that I can do whatever I want “. “It’s all about what makes you feel good,” the 19-year-old continued. “If you want to get surgery, go get surgery. If you want to wear a dress that somebody thinks that you look too big wearing, fuck it–if you feel like you look good, you look good.” which clearly is the response to all the trolls well in advance. It’s perfectly her choice as to what to wear and what not, no one can question her ideology regarding body positivity based on her clothing choices.

In an interview with British Vogue, Billie even discussed about the slut-shaming based on the clothing choices of women. Showing our body and skin does not make us less of a woman and also does not take away the necessary respect from us. Every person has their choices and their choices need to be respected says, Billie.

“It’s about taking that ‘Power Back’ ” – says Billie

Billie has always faced a lot of criticism from the public be it her music, body, and persona. She has always been fighting a battle with her insecurities and creating an image of her that is loved by all. This photoshoot is definitely an answer to all those who questioned her choices in any way. The whole purpose behind Your Power song lyrics and this shoot is to motivate people to leave all the insecurities behind and come out as your true self.” It’s about taking that power back, showing it off, and not taking advantage with it,” she said. “I’m not letting myself be owned anymore.” quoted Billie.