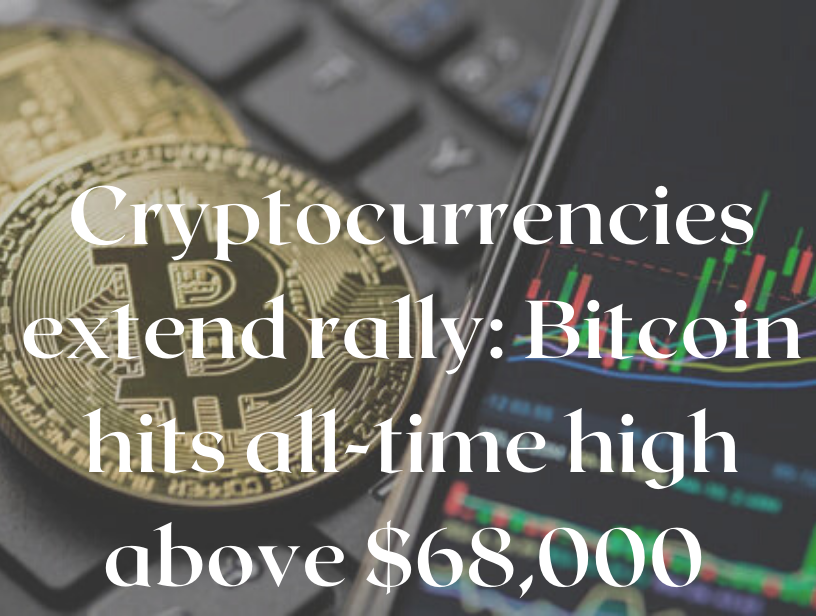 A cryptocurrency is a kind of secure online ledger in which everyone is investing and getting returns. The most attractive in these unregulated currencies is for-profit trading, with traders driving values high. Individuals see cryptocurrencies like bitcoin as the currency of the future, and they rush to buy them before they grow more valuable. Bitcoin hits all-time high recently.

Other people favor the blockchain technology that underpins cryptocurrencies because it is a decentralized processing and archiving system that is potentially more reliable than conventional payment systems. As per the market research, there are over 13,000 different cryptocurrencies publicly traded. Bitcoin can be the best cryptocurrency to invest in. The value of all bitcoins, the most widely used digital money, is estimated to be at $1.2 trillion. Now, Bitcoin hits an all-time high above $68,000. Let’s see the details.

Recently, bitcoin and ether hit new all-time highs, continuing their surge from the day before. Bitcoin’s price soared past $68,000 at one time, breaking a previous high established in late October. The world’s most valuable digital currency rose to $68,521 before dropping to $67,106. This had gained more than 2% in the last 24 hours as of 10:30 a.m. ET.

These new highs are part of a larger rally in the cryptocurrency market, which has topped $3 trillion this week. Solana and Cardano, the so-called “ethereum killers,” are up 21% and 16% in the last seven days, respectively. On Monday, the ProShares Bitcoin Strategy ETF, which debuted in October and follows bitcoin futures contracts related to the cryptocurrency’s future price, was up more than 8%.

Although it’s impossible to connect short-term price swings to a single event–and cryptocurrency price charts are highly unstable–some analysts believe bitcoin and ether will keep rising in the coming weeks. Mikkel Morch, managing director of crypto hedge firm ARK36, said in a note sent on Monday that a $70,000 price for bitcoin now “looks imminent.” Others are more optimistic about bitcoin’s future, with JPMorgan recently reiterating its estimate that it will eventually reach $146,000, with a shorter-term price goal of $73,000 for this year.

Bitcoin will receive its greatest upgrade in four years next week. Taproot is the name of the software upgrade. It will cause increased transaction privacy and efficiency–and, more importantly, it will enable smart contracts, which are a major component of its blockchain technology. Meanwhile, with implementing Altair, a network update that went live in late October, ether has been on the rise. Except for validatory, who are people who check transactions on the Ethereum network, Altair was mostly seen as a non-event. However, the upgrade was a critical step toward deploying ethereum 2.0, also known as Eth2. It has been in the works for years and will completely redesign the network.

The platform would move from the energy-intensive “proof-of-work” mining method, in which prospectors solve difficult mathematical equations to create new coins, to “proof-of-stake,”. Users simply use their existing ethereum cache to verify transactions and manufacture new tokens.Eth2 attempts to improve ethereum’s scalability, security, and long-term viability. This shift will have far-reaching implications not only for ethereum but also for the entire cryptocurrency ecosystem.

8 Largest Mutual Funds to invest in the USA