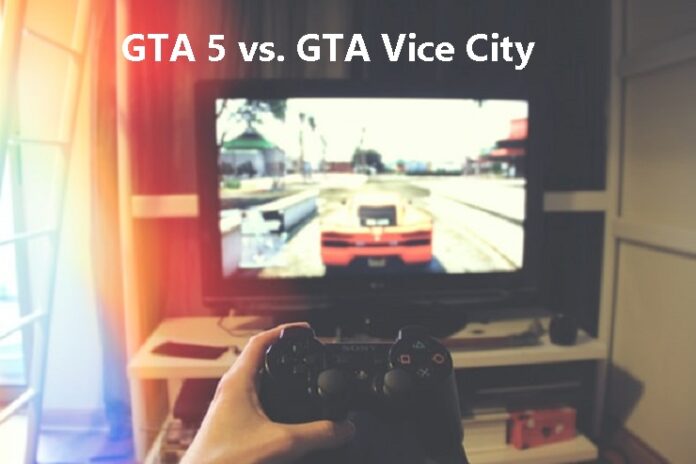 Grand Theft Auto (GTA), over the years, has seen a lot of success. The popular action-adventure gaming series by Rockstar have launched several games that took the industry by a storm, and one of the first names to do it was GTA Vice city, while the latest is GTA 5.

GTA Vice City was a gamer-heaven back in the days as it allowed the users to enjoy free-play gameplay that was quite rare back then. However, the new GTA 5 is a state-of-the-art masterpiece by the developers as it caters to the modern gaming requirements of the players. Download GTA 5 APK From here.

Although GTA Vice city was a classic that redefined the concept of action-adventure games and it has a huge fan base that still plays it to the date. The same is also true for GTA 5, as it is currently one of the most played games. There are nevertheless a few differences that the two games share, which include the following:-

Rockstar launched GTA Vice city in 2002, and it revolves around Tommy Vercetti as the main protagonist of the game and his rise to power. The entire story takes place in the fictional town of vice city, based in Miami. The story begins with Tommy being released from prison after the police arrest him as being a party to a drug deal. After his release, he is sent back to Vice city by Sonny Forelli, who also happens to be his ex-boss, to profit from the uprising drug dealing business. After he arrives in the city, Tommy slowly builds his power by buying businesses and property and meets Lance, who becomes his partner in crime. However, the end wasn’t too well for their partnership as Lance and Sonny failed to kill Tommy and takeover.

GTA 5 is based around three main protagonists Michael, Franklin, and Trevor, who eventually start as friends and partners while attempting various heists.  An exciting part of the story is that there are three endings to it all with different outcomes, and the player gets to choose what to do.

GTA Vice City is a pretty old game, and thus its graphics aren’t the very best. Furthermore, there is also a limit as to what you can do inside it, meaning that you can’t eat, workout, or perform various other actions that you can in GTA 5.

GTA 5, on the other hand, provides the best free-play gameplay in the industry. Apart from the story mode, you can also opt for the GTA 5 role-play version, allowing you to create your own story. You can do just anything in it, including robbing banks, creating assets, buying property, making films, etc., to taking up various jobs like police, lawyer, etc.

You can play GTA 5 in 4K HDR display which means that the game would be a lot more realistic. Another thing that makes it more interesting is the effects which provide an ultimate touch of realism.  While GTA vice city is only available at lower resolutions thus the game might not be the best-looking.

GTA 5 and GTA Vice city are somewhat familiar in terms of controls as they both allow you to maintain complete control over your character, including jumping, crouching, etc.

GTA Vice City is a classic and one that gamers will never forget. The story mode is filled with excitement, drama, and suspense which any action-adventure lover dreams. However, GTA 5 presents something unique, especially in the form of role-play version. Thus, both games are played to date by a large fan base that enjoys it to the fullest.