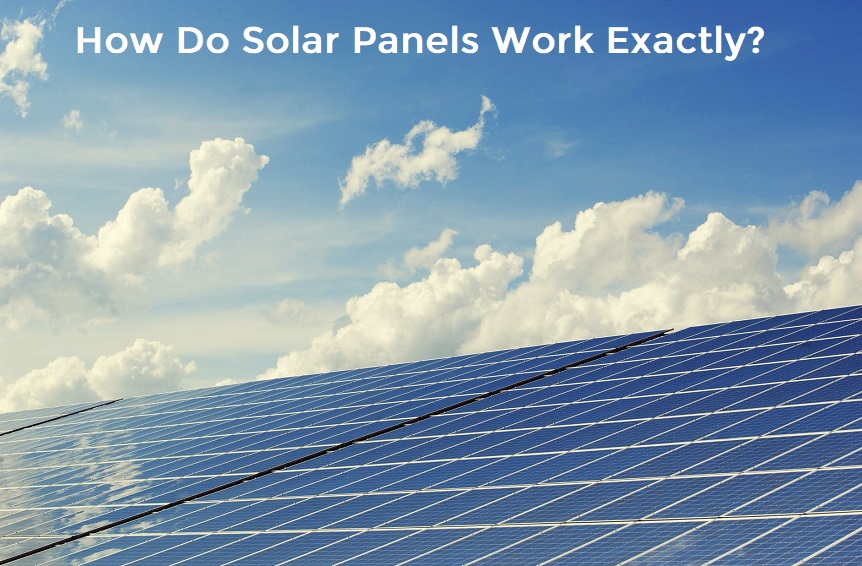 Those hi-tech expanses of gleaming glass are just one part of a complicated network that uses the sun’s renewable energy to power the homes within.

In this article, we’ll be getting into the nitty-gritty of solar power science. While it may appear complex, it all comes down to what is known as the photovoltaic effect, or matter’s capacity to emit electrons when exposed to light.

What Are Solar Panels?

A solar panel is made up of a number of solar cells.

A vast number of little solar cells spread out over a large area can combine to provide enough electricity to be useful.

The more sunlight a cell receives, the more electricity it generates.

The three main varieties of solar panels currently available are monocrystalline, polycrystalline (or multi-crystalline), and thin-film.

Each solar panel differs in terms of how they’re built, how they appear, how they function, how much they cost, and which installations they’re best suited for.

One solution might be better than the others depending on the type of installation you’re considering.

How Do Solar Panels Work?

As photos collide with atoms in a cell, it knocks electrons loose. A circuit is made when conductors connect to the negative and positive ends of the solar cell.

When electrons move across a circuit like this, electricity’s created. These panels are made of numerous cells, and many panels can be connected to make the solar array. Reach out to solar companies near me to find out more!

To put it simply, the more solar panels you install, the amount of energy you’ll generate will increase.

Direct current (otherwise known as DC) electricity is generated from these solar panels. Electrons flow one way through a circuit with DC power.

As an example, imagine a lamp is powered by a battery. The electrons travel through the negative to the positive after passing through the circuit in the lamp.

Electrons are alternated in AC (or alternating current), reversing direction frequently, much like a cylinder in a car engine.

When a wire is circled near a magnet, a generator produces AC power. This generator may then get power from many sources, including but not limited to solar energy.

The sun is a power plant in the form of a natural reactor in our solar system. Photons emit from it, which are small packets of energy that travel 8.5 minutes from the sun to the Earth.

Enough of these photons hit the planet every 60 minutes to generate so much solar energy, it could meet the world’s energy needs for a year.

Photovoltaic power is only 0.05% of total energy use here in the United States. Regardless, as solar technology makes further advances, the cost of going solar is decreasing, our ability to harness the sun’s energy grows.

According to the International Energy Agency, solar energy just overtook all other fuels as the world’s fastest-growing power source in 2017. This marked the first time that solar energy’s growth surpassed other fuels.

So, how do solar panels work?

Simply, when the sun is shining on a panel, the PV cells absorb energy from the sun, and through the flow of electricity, generate clean power.

Now that you understand the fundamentals of solar power science, you can marvel at how modern photovoltaic technology can harness the sun’s tremendous power to power everything within your home.

It isn’t rocket science, but it is certainly human inventiveness at its finest.

For more information on solar panels and what to consider when buying, come check out our blog!

How to Add Your Own Sound to TikTok Videos