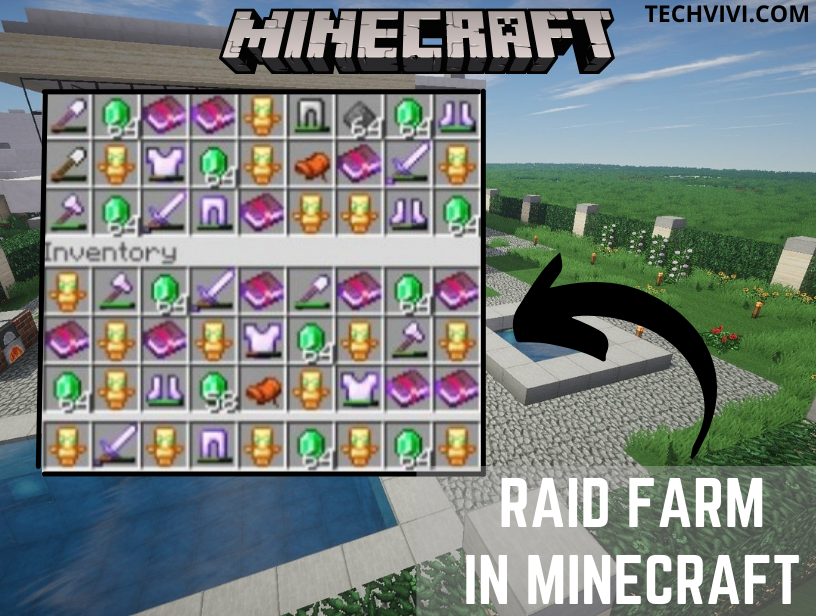 Raids are dangerous battles against hostile pillagers and ravagers. The raid farm in Minecraft will give a completely new look to the raids. The Bad Omen effect gives rise to Raids in Minecraft. Bad Omen is obtained by killing a pillager leader with a banner. Raids provide incredible loot and rare items to Minecraft players who can defeat them. Defeating a raid involves immense effort with a raided farm.

How to use Minecraft enchantment in Java & Bedrock edition: 5 quick tips

How to build a raid farm in Minecraft?

For getting a raid farm in Minecraft  what you can do is that on a flat area of land, carve out an even base for the build by creating a plus shape with both lines being eight (8) blocks long. Make sure that one line should be three (3) blocks wide, whereas the other should be just one (1) block wide. Now connect both the ends of the lines to get a diamond shape. Now what you have to do is that you need to carve out the rest of the blocks remaining within the diamond-shaped area.

The second step is the creation of a make-shift village. Players have to get the villagers as well as beds to this location. Within the carved-out area, you need to dig about three or four blocks down. Then now carve out some more space for a bed so that villagers can stand. Now place the bed down in the hole and transfer the villager into the hole as well. This transfer of the villager is done by trapping the villager in a boat and driving it into the desired area. The moment the villager and its bed are in the hole, it is time to say goodbye close off the hole to keep the villager safe from the raids occurring shortly.

Now you have to focus completely on the diamond-shaped area. On the corners of each block where there is the border of the caved area, place down all the slabs. For this over half a stack of slabs in total are required. Now you have to place a source of water on each block. You also have to add water in the middle blocks of the three-block wide sections created earlier when carving out the plus sign shape. Players need to be really careful while doing this step since it is an important step. If this step is done correctly, a flow will be created that will lead to the middle of the diamond shape and it should leave 3 dry blocks.

The three blocks present in the middle of the diamond area should be mined into a deep hole. Dig a deep hole of about  27 blocks. Players have to make sure that the area they are using for building the farm in Minecraft should not have a cave or ravine hidden under it. Once you reach underground, carve out an area to the side for chests, hoppers, and a place to stand. You need to place hoppers where the hole opens up and have them connect to chests. You need to place slabs on top of the hoppers and full blocks in front of them so that you can create just a half block of opening. This opening will allow for hitting the pillagers when they drop in. When this underground section is in place, then players need to dig a staircase out of the hole back to the surface. The staircase is needed to secure the entry to the raided farm so you must build it in order to prevent other entities from entering.

Once the building is complete, the only thing you need to focus on is the Bad Omen effect. Players can go to a pillager outpost and kill the pillager leader. After that, they can return to their raid farm, and the raid will get activated. The hidden villagers will make pillagers arrive at the area and water will go deep into the hole. When pillagers will fall inside the hole then the players can kill mobs and start to get the benefits.

Gamers will take control of a Minecraft village so as to accumulate rare and helpful items. In Minecraft, there are so many different kinds of villagers with whom you can trade and make a wide variety of deals with. When you are farming these villages be it an actual village or separate village make sure you keep them safe from hostile mobs.

To avoid issues such as exploding creepers or zombie infestations in a village, here are some tips which you can use for protecting a Minecraft village-

5 ways to protect villages in Minecraft

Customization of villages is important for the sake of the villagers’ protection. One of the simplest ways of protecting a village in Minecraft is to build an enclosure around it surrounding the community. This is done with the help of walls or fence blocks. This fence or wall helps in ensuring that no outside mob will enter the village. If there is not enough light being emitted within the enclosed area, hostile mobs might still spawn at night. To avoid this situation players can place torches or any other light source around the community in order to stop the spawns from spawning.

To protect the villages players should not let the Minecraft mobs spawn in the first place. When the sun goes down in Minecraft, players can find a bed and sleep through the night just like the villagers they’re attempting to protect would do. Sleeping at night will help gamers in avoiding running into any sort of hostile mob.

To ensure utmost protection to the villages it would be much better if Minecraft players slept in or near the village itself. They can do so by stealing the villager’s bed. But if they don’t want to do this then they can build their own house or can craft their own houses. By building a house near villages, gamers can keep a look at it. The close proximity will allow players to battle any hostile mob before they can wreak any havoc onto the town. Also, the other advantage that players can get by living near villages is that their access to great trades increases. The villagers will likely want to give great deals to those who want to protect them.

Another method of protecting villages in Minecraft is by utilizing the strong, stoic mob, the iron golem. The main purpose of these protective mobs was to keep villagers safe from harm. Not every village will automatically get an iron golem. Luckily iron golems are one of the few mobs created by players. An iron golem is very simple to make. It can be crafted using four iron blocks and a carved pumpkin. In instead of using a crafting table, the blocks should be placed on the ground in a specific shape. Any number of iron golems can be added to the villages by the players. Since its the best method of protecting the villages, therefore the players should focus more and more on creating iron golems so that villages can be protected efficiently.

By building a raid farm in Minecraft

Players must be aware of the dangerous raid that could easily strike tragedy in the village community. The simplest way to avoid raids is to simply not kill pillagers and build a raid farm in Minecraft. If this happens then this prevents players from obtaining the Bad Omen Effect. If players come to the village with a Bad Omen effect, a raid will start and pillagers will infiltrate the area. Their sole aim is to kill all the villagers. Iron golems can assist with raids, but they can be quite difficult to conquer overall. Gamers can make some incredible deals and can get some awesome goodies, by defeating a raid. Villagers who will get saved from a raid will provide any player who protects them with lots of fun and rare items either for free or at a discounted price. Gamers should be careful and ready before entering the raid battle so that they can win the raid battle and can protect as many villagers as they want and do not die themselves as well.

How to Find a Pillager Outpost in Minecraft

How to make a lightning rod in Minecraft 1.17?

How to make a conduit in Minecraft’s heart of the sea?