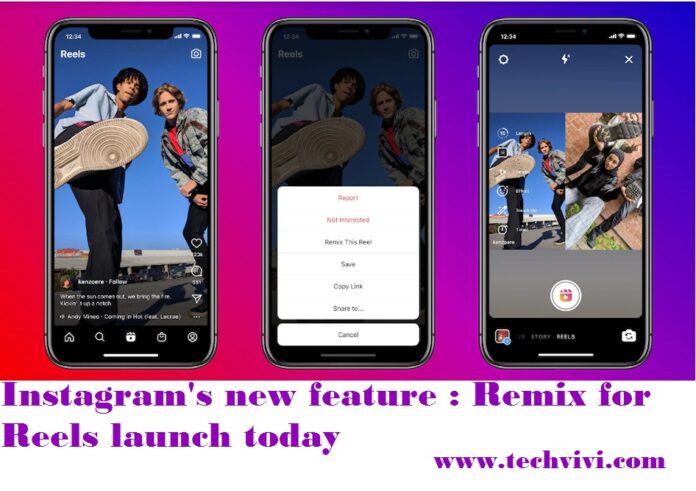 Instagram has been updating and rolling out new features off-late. This is because of the competition in the market. It has literally become difficult to sustain that position for long. However, the new feature from Instagram is called Remix for Reels. This is quite similar to Tik-Tok’s Duets.

When will Instagram’s new feature launch ?

Instagram has officially announced the release of the new feature called Remix for Reels started today.

The company took to twitter to make the official announcement about the same.

Whether you’re capturing your reaction, responding to friends or bringing your own magic to trends, Remix is another way to collab on Instagram ✨ pic.twitter.com/eU8x74Q3yf

What is Instagram’s new feature ?

To use this new feature, go to the Instagram video you want to record with. Select the three dots that appear in the upper right corner, and then select the “Remix this Reel” option. Instagram will post the recorded video in the upper right corner, and allows you to view your recordings on the left. Click the “Record” button to start recording your mix. You can use the tools displayed in the left pane to edit the video by adding effects, filters, speed and adding sounds.

By default, Instagram enables the Remix option for new videos. If you don’t want to use this feature, you can turn it off. To disable the “Remix” option, you need to go to “Settings”> “Privacy”> “Reels”> “Enable Remixing”. All you have to do is turn off this switch to activate the mix.

The new feature from Instagram is made available on both platforms, Android and iOS.

The Reels in India were launched by Instagram in July 2020. Ever since the release the company has seen the popularity has only increased with passing times. The idea for the launch of this feature was to make people showcase their talents just like they did with TikTok.

Snapchat is also said to be working on the similar feature to give a tight competition.

Anyways, use the Instagram’s new feature and let us know how good you feel about the same.

Informative enough ? What are you waiting for ? Share with your friends and fam !!

Meanwhile, we will keep you posted with all the latest news about Instagram.