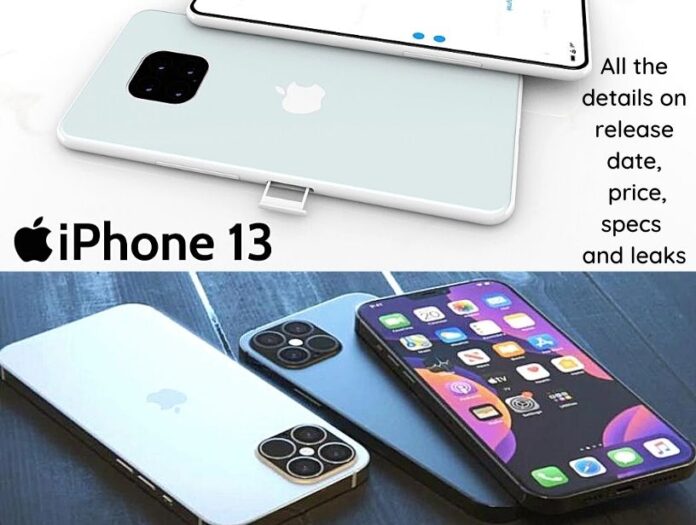 The iPhone 13 is still months away from release, but thanks to plenty of new iPhone leaks and rumors, we’re learning all the time about the upcoming series of handsets, including the iPhone 13 Pro. iPhone 13 is an unreleased smartphone from Apple bit some rumors are going out in the tech industry. Here, You can get updates iPhone 13 – Know All about release date. iPhone 13 releasing soon! Here is a quick guide-

Just 13 months away from reality, soon it will rule over the entire technology market. Rumors regarding the same have already been out. As per the latest rumors, iPhone 13 will offer a 120Hz LTPO display on both Pro models, efficient battery life, efficient 5G modem, and substantial upgrades to the all-important cameras. That includes the possibility of a LiDAR sensor on cheaper iPhone 13 and iPhone 13 mini, as well as a new portrait video mode.

As far as the design of this new model is concerned Apple is not planning anything grand though we know that iPhone’s notch will shrink on every new model. Some other rumors suggest that iPhone 13 will have a truly port-less design.

Since iPhone 12 mini was not sold well therefore the company will keep the price iPhone 13 mini low. At this time we cant be sure of price of iPhone 13 but it is presumed that it fill in this range -$699, $799, $999 and $1,099, respectively. iPhone usually keep the price of it’s latest model close to the prize of it’s previous release.

According some recent rumors, the model is named as iPhone 13 as the earlier models were given the name iPhone 11 and 12.But some people are also claiming that the it might get a name as iPhone 12s.

The ‘s’ model of iPhone actually implies that the current model has a lot common with the last released model. Let’s wait and see which name gets finalize.

The rumored That iPhone 13 come with In-display Touch id or in display facial recognition And Apple At the event of apple iPhone 13 there should be 4 model like iphone13 3.1, iPhone 13, iPhone 13 pro, iPhone 13 pro max, and Apple is going to pack the iPhone 13 With industry Most Power-full Mobile Processor After launching M1 Apple New MacBook Processor

As per the latest rumors iPhone 13 tipped to come with a smaller display notch, after several generations of using the same, somewhat bulky notch. This notch will be achieved by combining separated infrared flood illuminator, sensor and dot projector which cover up  iPhone 12’s Face ID unlocking system, into a single module. This narrow notch will be activated with the help of 2 sensors. The iphone13 3.1 GHz, Dual core, Firestorm + 1.8 GHz, Quad core, Icestorm.

Some reports says that die size of the VCSEL chips used in the Face ID scanner will shrink by 40 to 50%.A smaller face ID chip means smaller notch for iPhone 13.

iPhone 13 Pro Max dummy will be slightly thicker than the iPhone 12 Pro Max. As per some images released by a set of images from Greek repair provider iRepair iPhone 13 is shown in trio of sizes with a smaller display notch. The notch is compact and phone’s earpiece has been moved to top bezel and is not their inside the notch.

If you want to know about final model of iPhone 13. You can see few photos depicting every angle has been released.  iPhone 13 renders from artist Vova LD also depict an iPhone with a smaller notch and larger rear cameras.

Concept artist Ian Zelbocreated renders of the iPhone 13,  based on CAD files from leaker Jon Prosser Diagonal camera lens array and smaller notch are shown in this.

The expected date as per the rumors is September 24,2021. Apple has it’s fixed month of releasing all it’s versions in a year that is September. Though in 2021 it released iPhone 12 in October due to coronavirus. A15 Bionic chip  will power the  the iPhone 13 this time. As per one rumor  A15 Bionic has started it’s production which gives hopes that iPhone 13 will be released in September 2021.

The first hint regarding the features of iPhone 13 will come out in June. When Apple shows off iOS 15 at next week’s Worldwide Developer Conference. WWDC 2021 kicks off June 7, and the keynote featuring iOS 15 news will take place at 1 p.m. ET/10 a.m. PT.

After learning about the rumors we know what is the expected design and accessories of iPhone 13. Rumors keep rolling out to keep us informed about the release date, price, specs and many more. However, according new rumors iPhone 13 may arrive with smaller notch as compared last 4 year iPhone’s. And it doesn’t mean that iPhone 13 is not have face id.