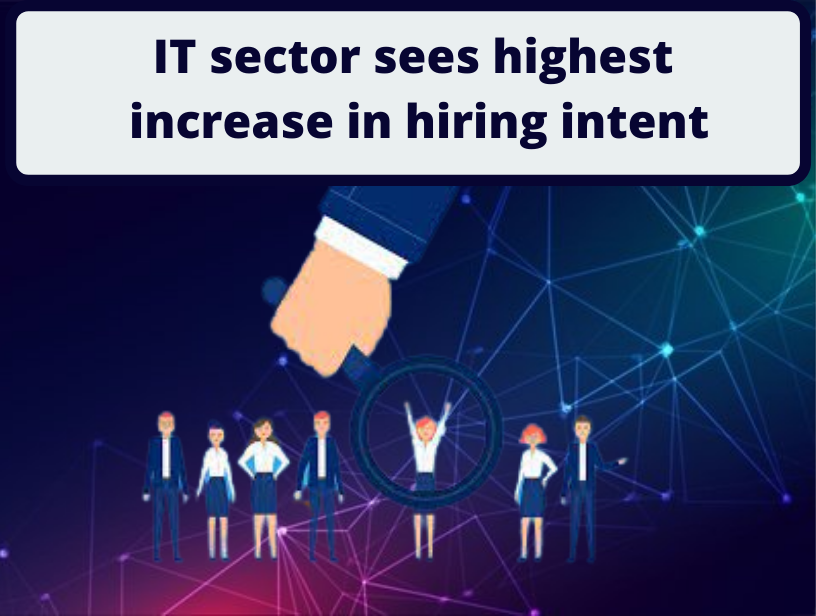 In Q3 FY22, the Information Technology sector intent to recruit reached 43 percent. Sales came in second, with a 13 percent rise in hiring intent as compared to the October-December 2021 timeframe. This rise is due to rising attrition and growing preference for digital services. According to a report, the desire to hire in the IT sector increased the most, by 18 percent, in the January to March 2022 quarter, as companies continue to invest in technology and attrition rises.

In Q3 FY22, the industry’s intent to recruit was 43 percent. Sales, which showed a 13 percent growth in desire to employ compared to the October to December quarter, came in second.

This rise in purpose to recruit from IT and sales departments is a result of the organisations’ focus on both operations and growth, according to Teamlease Services’ Employment Outlook Report on intent to hire. According to the research, “remote recruiting and remote/hybrid work have rendered the IT function an integral aspect of most companies.”

Furthermore, attrition is on the rise. “Another driver of recruiting intent is higher levels of retention across departments and across many industries.” Businesses recruiting for IT support roles were among the beneficiary of churn in the technology and allied sectors, according to the research.

On the back of growing demand and attrition, top IT businesses have boosted their fresher hiring plans in FY22.

How Do Solar Panels Work Exactly? The Technology Explained

On the basis of growing demand and rising turnover, leading IT organisations have quadrupled their fresh recruitment plans for FY22. According to the analysis, attrition was 17.8% in Q3 FY22, compared to nearly to 10% from July to September 2021.

E-commerce, internet companies, and educational facilities are among the other industries that are estimated to grow recruiting.

Bengaluru and Chennai had the largest recruiting intent in Q4 FY22, with 88 percent and 71 percent, respectively. However, upto 21 percent and 26 percent from the previous quarter. While the new COVID-19 rise will be a challenge, Teamlease’s Rituparna Chakraborty, co-founder and executive vice president, stated in a statement that the impact will be manageable.

TCS, Infosys, and HCL will seek to grow in the United States, Southeast Asia, and India, while companies like Algonomy (formerly Manthan), 3i, Persistent, Ramco, Financial Technology, Decimal Technologies, and many other private Tier II and Tier III firms are estimated to produce a higher percentage of the revenue from products/platforms in global markets such as the United States, United Kingdom, United Arab Emirates, Singapore, and Africa.

What Impact Has Technology Had on the Online Casino Industry?