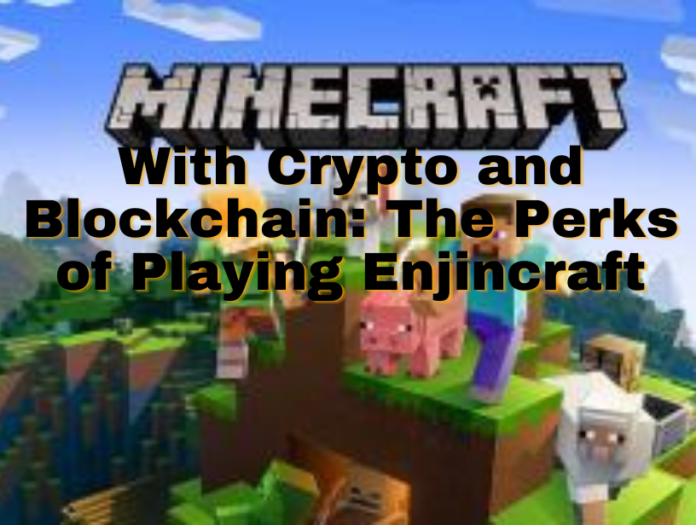 Now you can access Minecraft with Crypto and Blockchain. Minecraft is ideal for use on the blockchain. Resources, craft mechanics, player interaction, and teamwork are all part of the game’s features.

Greetings, dearest fellow! The crypto gaming Imaginarium is a place where people may express themselves and their ideas freely. Of course, there are certain guidelines about how the blockchain works and how it might enhance existing games. On the other hand, cutting-edge technology is reaching new heights every day, therefore it’s sometimes necessary to be a naive dreamer to keep up with them.

If you’ve read previous Imaginarium articles on League of Legends, Fortnite, or other games and thought to yourself, “it’s just dreaming,” consider Minecraft, where crypto is already available through Enjincraft, a plugin that enables your Minecraft server to adopt cryptocurrency in-game items and a crypto economy.

Minecraft is an example of a game that is ideal for blockchain. Take a look at the following features: a resource system, crafting mechanics, and player interaction, and team play. Collecting, breeding, and marketplace economy are characteristics that are already present in most crypto games, but in a somewhat different form. However, because Minecraft is more about gameplay than economics, blockchain can provide more valuable data.

Enjin for a Game Engine

Enjin is a blockchain initiative with a ten-year track record. This suggests that it was at the very beginning of cryptography. The goal of Enjin is to produce SDKs (software developer kits) for other gaming companies to use in their projects, allowing them to incorporate blockchain features or perhaps the full Enjin ecosystem.

Enjin Coin (ENJ) is the ecosystem’s primary cryptocurrency. It is an Ethereum blockchain-based ERC-20 token. On the Enjin network, this is the only transaction token. Moreover, the project’s network was rebuild to the JumpNet Blockchain, which is quicker, more secure, and fully environmentally friendly! In addition, smart contracts were introduced to the ecosystem. This means that any game can use the automatically executed, fraud-free transactional protocol.

Following the formation of a partnership, developers can integrate an e-commerce environment or tokenize in-game products, bringing value to all players. Furthermore, this implies that participants have actual ownership of them.

In some other game, for example, if you acquire anything, it stays within the game. All of the goods, as well as the game code, will vanish if the developers shut the project down into smaller. If such things, on the other hand, are tokenized, they remain in your wallet indefinitely, even if the game is no longer active. Every in-game transaction should be verified by the Enjin wallet in such a method.

Enjin also gives you the option of melting your goods back into Enjin coins. Because players may convert goods back into cash at any moment, this feature guarantees that each item retains its worth. The Enjin coin, you can use as a form of in-game money. In ENJ, for example, players can get rewards for completing tasks or trade with one another.

Enjincraft: How Does It Work?

Enjincraft is a Minecraft mod plugin. If you run a server, you may install it and let your gamers access the Enjin ecosystem, which includes many of the above-mentioned advantages and benefits.

To begin, everyone must link their Enjin wallet when joining an updated server. The first benefit is that players may swap crypto from within the game via the command terminal. This opens the door to in-game trading and bartering. Because this functionality is built-in to the plugin, trades are conducted using smart contracts, which provides a high level of security.

In addition, the update enables the use of blockchain assets. It may be built by the Enjin team, including those from other games in the Enjin ecosystem, using the “The Multiverse” package. As a result, players with specific assets in their wallets will receive specific benefits as determined by the game service administrator.

As said before, this also applies to assets from other Enjin games. For example, if you discover a game in which you can acquire a specific object more easily than in Minecraft, you may create it there in parallel and utilize it in Minecraft right away. Indeed, the Enjin ecosystem aspires to create a gaming universe!

Not only may these blockchain assets provide resources, but they can also provide in-game mechanisms and skills. The server owner may program fireballs or telekinesis to hold exact things in the wallet if they so wish. This opens up nearly limitless possibilities for innovation and the creation of gaming multiverses.

One of the most popular projects in the Enjin universe is Minecraft. That is why moving resources from Stardew Valley to Minecraft and back is still a pipe dream. The initiative needs greater attention from the gaming industry’s major players.

As a server owner, you need to install the plugin. As a result, the network that handles blockchain may be limiting.

Why Should You Be Worry?

Minecraft is the type of game that allows blockchain to shine. Story-driven games would not gain as much from technological advancements as the creative sandbox genre, which encourages players to utilize their entire creativity. Within the Enjin ecosystem, blockchain adoption opens up the possibility of converting the game’s world into a multiverse. This is unquestionable that in the future you can play Minecraft with Crypto and Blockchain.

How To Download Install Faithful Texture Pack in Minecraft