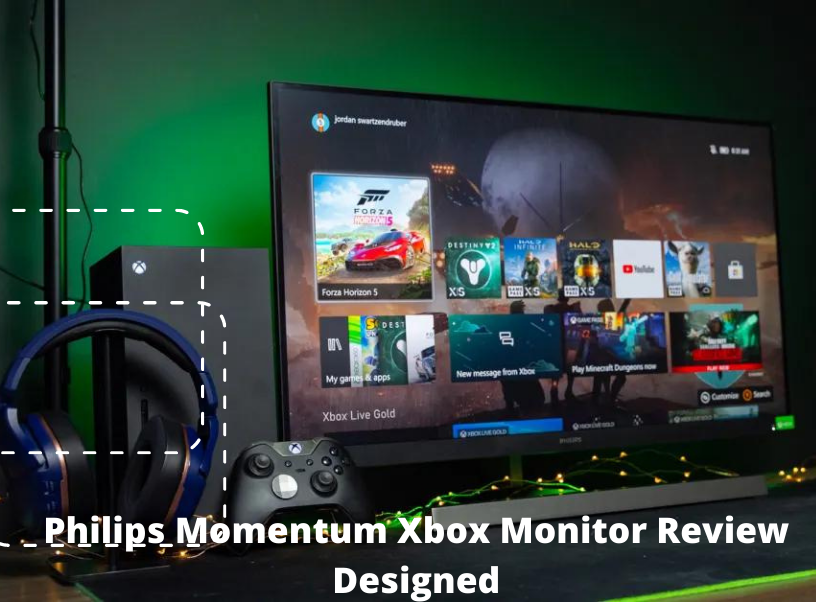 Philips Momentum TV-sized Xbox monitor is out to enhance your gaming experience. The monitor is perfect for the Couch Gamers. In the world, people are distancing themselves from cables and televisions and playing video games more than ever before. There is a special and very specific use of a giant TV-sized computer monitor that kicks out the traditional TVs. grab the haunting experience of home theater with Philips’ Momentum 559M1RYV monitor, with 55-inch 4K HDR display. It is the first major monitor that is earning Microsoft’s Design by Xbox” approval. It seems that the monitor is made especially for the fit that is designed for it.

The Philips Momentum 559M1RYV monitor offers HDMI 2.1 for playing video games in 4K at the refresh rate of 120Hz, like the Xbox series and the PS5. The monitor comes with an inbuilt sound bar that is designed by audiophile speaker designers Bowers & Wilkins, that ensure better audio experience than the average TV. For those who want to connect it to a PC it provides a full range of monitor configurations options. It provides a DisplayPort 2.0 and all the other stuff that is typically attached to the TV screen. The Momentum 559M1RYV is very easy to transform from a TV to a gaming monitor.

Beyond its astronomical size of 32-inch monitor, the monitor is also very strong. The key feature to note down is that it is a 16:9, 4K LED backlit panel which is capable of running up to 144Hz  via HDMI or Displayport. The combination of 4K and 144Hz is very compelling. Among PCs the 4K resolution is still not very common. This monitor is the part of a rapid change for the Xbox Series X and PlayStation 5 to adopt the 120Hz/4K.

The hallmark of the monitor is its brightness rating. The Momentum is a VESA-certified DisplayHDR 1000. The number is very common for TV but not for a gaming monitor. Console manufactures emphasize that HDR is the key element of visual fidelity. The bigger the screen is, the brighter it should be. The momentum 559M1RYV has a strong contrast and dynamic brightness. You will not notice any issue with the visual latency on the PS5, or Xbox series or Nintendo switch. The 559M1RYV is rated for 95% DCI-P3 wide color gamut and for its well-saturated colors.

The best thing is that it comes with a remote input like most of the TVs. though the remote is not as sharp as the average TV remote. There is no numpad, only a handful of buttons for the directional pad for navigating through the menus. Users didn’t find any problem in using the remote. They are much more comfortable than the onboards buttons used for most of the monitors. It is one of the best configurations you will get in a gaming monitor.