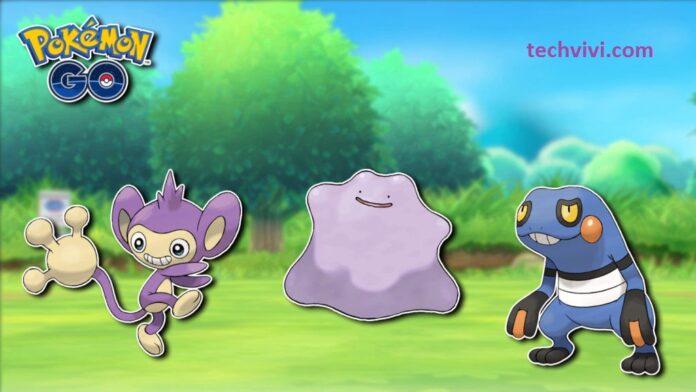 Kicked off on 1 April 2021, the Pokemon Go Tricky April Fools’ 2021 event was something you cannot give a miss. This one-day event has the ability to shake up the entire gameplay. It has turned an off-week into fun and dynamic. This even left trainers desiring for more and truly lived up to the hype.

The Pokemon world is loaded with several tricky or mischievous pokemon. As a result of which this GO Tricky event was organized to bring some of the trickiest Pokemon like Aipom and Croagunk to life.

Niantic used a trickster holiday to launch this event and introduced some of the rarest spawns of the Pokémon community to add a thrill.

This one-day event mainly comes with tons of exciting tasks for the Go Trainers such as fighting with Team Go Racket Grunts, catching some of the playful Pokemon, getting the Team Go balloons, and a lot more.

Let’s take an overview of this Pokemon Go Tricky April Fools’ 2021 event and get to know about the major elements that actually made the event super exciting.

There are a mind-boggling number of tricky and playful Pokemon out there. A couple of wild spawns that appeared during the Pokemon Go Tricky Event are:

Those spawns who have the potential to be shiny are indicated with an asterisk.

While most of the tasks finished on April 1, the timed research will continue through 8th April 2021. The three tasks that trainers had to complete during the Pokemon Go Tricky April Fools’ 2021 Event are:

The completion of tasks doesn’t go in vain as the players get the rewards for the same. Those who will get it done by April 8 at 11:59 pm local time will be awarded A Super Racket Radar to find Giovanni, 100 Stardust, and 100 XP.

As now the event is over, let’s get to know what components exactly worked in this Pokemon Go Tricky April Fools’ 2021 event and made it successful.

What didn’t work during the Pokemon Go Tricky Event?

While some features created a buzz during the Pokemon Go Tricky Event, there are lots of them that didn’t work at all and disappointed the players’ community. Let’s take a glance at some of them here.

Pokémon Go has continued its tradition of celebrating real-world holidays by organizing Pokémon Go Tricky April Fools’ 2021 Event. This prankster holiday event was a great hit for the game developers. It gave players a chance to catch ever-elusive Ditto.

Those who participated also got their hands on a Shadow Aipom. While the organizers gave the players community seven days to complete the task, a lot can be finished on the prankster holiday alone.