Home Community Pokimane vs Valkyrae no – makeup: Different reactions to their no-make-up... 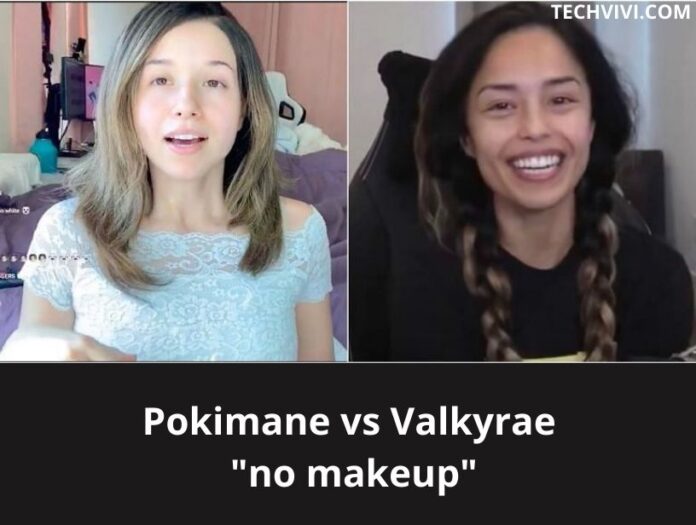 This article talks about the difference in the kind of reactions that the no-makeup looks of Imane “Pokimane” Anys and Rachel “Valkyrae” Hofstetter. In October 2018, a live-stream hosted by Pokimane on Twitch with no make-up got a huge success. Most of the viewers became happy with this new makeup look but many viewers criticized and trolled this look. Valkyrae on the other hand posted a makeup tutorial in July 2020. This was posted almost two years after the Pokimane post. But Valkyrae’s look has a completely different reaction. Viewers didn’t criticize and trolled for her look, most viewers seemed happy and complimented Valkyrae for her “natural beauty.”

Both these two streamers received extremely different reactions to their no-makeup looks. On October 23rd, 2018, Pokimane hosted a “Just chatting” stream with no makeup on. At the start of the meeting, a part of her chat began to talk about her. They trolled her on how she looked “ugly” without makeup. In addition to this in the major part of her career,Pokimane had a large number of”simp” followers. Many of her supporters responded on Twitter (pokimane twitter) to this “no-make-up look” and bashed trollers for showing such double standards.  They wrote how Pokimane looked pretty even without makeup. They even claimed that those who are criticizing her looks were not her “real fans.”

The term “Pokimane without makeup” became one of the most common search terms related to Pokimane on the internet IN 2018. To deal with this issue the streamer posted an elaborate tweet with multiple “no-makeup” selfies. This is to keep the mouth of trolls shut. In her tweet, she encouraged people to be sensitive towards others. She also tweeted that we should not judge them only on the basis of their looks.

Among all the people who supported her one was Valkyrae. In one of her tweet she called Pokimane an “inspirational goddess”. Valkyrae said that she was happy about the fact that Pokimane stood up for herself. Of course, the toxicity that Pokimane received eventually toned down .Her loyal fans not letting go of an opportunity to stand up for the streamer

The reaction of people was not the same when Valkyrae debuted her “no-makeup” look. Multiple reasons may have played a part. Pokimane, remain involved in a plethora of controversies due to her no-make-up look.

Pokimane paved the way for her fellow female creators to stream without makeup with courage and without any burden of looking ‘perfect. Instead of being bogged down by the trollers Pokimane stood her ground and promoted positive messages. Messages regarding body positivity and natural beauty are discussed. When Valkyrae posted her makeup tutorial video, she was not trolled at all. In fact, her fans loved her look and complimented her for her “natural beauty”.

With the help of certain reports and figures, we get to know that  Pokimane might not be too concerned about the situation. In fact, she was proud of the fact that she was the first truly popular female content creator. She had the courage to show her fans how she looked without makeup. The main reason why  Valkyrae did not get criticized at all for her no-make-up look, due to Pokimane and her fans’ reaction to trolls when they criticized her back in October 2018.

How did the Pokimane garage door trend start? Origin and aftermath explained

Imane “Pokimane” Anys introduced a garage-door skin in July 2021 in collaboration with Rust. The fans can get these skins by simply watching Pokimane’s streams. This skin was the second garage-door skin that Pokimane had released. In January an artist  @puppeteer7777 had designed the first skin which  Rust’s creators released in Facepunch studios as a collectible item. When Pokimane released her second garage-door skin in a matter of months, she was criticized by a range of Twitter users. They wanted to see her make “better content.”

The Pokimane garage door trend: How did it begin?

Pokimane is one of the most popular content creators of all time. Undoubtedly the most famous and influential creator as well. Due to this charm her content, social media interactions, and broadcasts are always a matter of discussion over the internet. In the past few years, Rust’s developers Facepunch studios have collaborated with a range of content creators to release collectible skins and other items including the likes of Leslie “Fuslie” Fu and Peter Park, apart from Pokimane. Pokimane’s first garage-door skin met with a mixed response, with some fans eager to acquire the item and some busy criticizing it. However, after the release of the second skin fans trolled her by saying that Pokimane was not being “creative” enough with respect to her content.

How to Add Your Own Sound to TikTok Videos

In her defense, the items in question were available to her viewers for free, with other streamers such as Fuslie also releasing garage-door skins as well. The community of Pokimane lovers pointed out how both her themed items were garage-door skins. But her fans were not impressed with the overall layout and design. Rust fans claimed that  “Pokimane simps” will flaunt the skin in-game, and claimed that they will destroy it with explosives if they come across it. Regardless, this sparked off an entire trend, with “Pokimane garage door” becoming a commonly searched term in recent months. Fans might be surprised to learn that the overall trend began simply due to a skin that she released in collaboration with Facepunch studios.

Content creation is not an easy task. We as viewers always expect a perfect look from our favorite influencers but we must be sensitive to their personal choices as well. Everyone needs to take a rest and so they. We must show sensitivity towards all content they are creating. Trolling content creators does not make you cool, but it does affect the mental health of the creator badly. Being an influencer or creator doesn’t mean to be creative but to be your true self and that is what all the creators aim at. As a viewer, we must respect their content and should make the internet and social media a safe place.

How to make a Lead in Minecraft