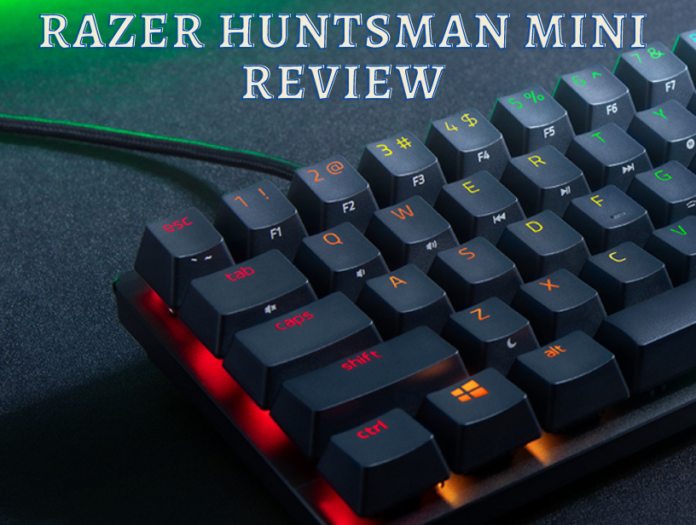 In 2020, Razer appears to be on a roll. It officially unveiled two little gaming mice, the DeathAdder V2 Mini, and Viper Mini, as a nod to travelers and individuals. They have smaller hands who desire a responsive and agile play experience. Many firms create TKL models, but Razer is one of the first of the large PC-gaming brands to create a 60 percent keyboard in the name for Esports with the Huntsman Mini. It is a commendable effort.

The Razer Huntsman Mini follows in that history, with a 60% design that mimics the popular Ducky One 2 Mini RGB while maintaining the Huntsman Tournament Edition’s legacy. Razer’s famous linear optical switches and Doubleshot PBT keycaps are used in the new compact keyboard.

With Black Friday approaching, there’s a good chance you’ll be able to snag a deal on one of them. On this year’s Prime Day, Razer had a lot of amazing deals on its hardware, and with the typical price of $120. any discount that brings it down to $100 or less is worth it to take advantage of.

What is Razer Huntsman Mini?

The keyboard is ultra-compact, with 60 to 65 keys, or with the layout of a traditional 104-key keyboard. The Huntsman Mini includes 61 keys, which include all the keys found in a typical keyboard’s major “typewriter” segment: alphanumeric keys, and also main system keys including the two Ctrl and two Alt keys, as well as the Windows key. To keep the keyboard extremely spatially, all other keys have been removed, including the function row, cursor arrows, and Delete.

Many 60 percent keyboards are now available, including models from Ducky, Cooler Master, Anne, MOTO SPEED, and others. They’re well-liked by two main demographics:

Consumers receive another clever option for a desktop arrangement when linear optical switches are used.

It offers some high-end features:

The essential function of a small keyboard is the same as a full-sized keyboard, but without the accessories, thus there is no learning curve. The hardest change for me was adapting because of no separate arrow keys compared to a regular TKL.

To compensate for the additional functionalities that the extra keys bring to a standard keyboard, Many of the auxiliary keys, such as the primary QWERTY row and the GHJKL keys, are given multiple duties by Razer, which is commendable. It’s still a pain to get to them — you have to hold the FN key (right side) while pressing W to increase the volume—but it works and is more convenient than mousing to the volume control in Windows.

There will be a lot of space on your desk, which you can use to angle and rotate the keyboard as you want. You may effortlessly rotate the board to create an ergonomic gaming configuration, then quickly return it to its original position parallel to your screen when you need to type. I recently purchased a twin monitor arm and noticed that every time I changed either screen or switched my attention between them, I had to reposition the keyboard. With a compact keyboard, making these kinds of spot adjustments is much easier. I wouldn’t be able to turn or shift it at all on a full-size board.

Doubleshot PBT (Polybutylene Terephthalate) keycaps ($30) are also available from Razer, which will allow you to switch out (or mix and match) various hues, such as quartz, white, green, or black. The keys, which are formed from a two-layer plastic injection mould, are not only magnificent, but they will also last for years. Due to “bespoke manufacturing procedures,” Razer also has the thinnest font conceivable on a Doubleshot PBT keycap.

This little keyboard not only provides all the advantages of the Huntsman keyboard, but it also looks beautiful. Something is appealing about a simple, no-frills design that, when combined with RGB and colored keycaps, makes a powerful statement. Razer is also having two outstanding features:

For updating RGB, loading stored profiles, and adjusting performance characteristics, Razer’s Synaptic application is essential for many of its mice, keyboards, speakers, and even monitors. Users can now simply connect in the Huntsman Mini and avoid having to install Synapse. Users may quickly toggle all the major lighting effects, such as wave, spectrum cycling, breathing, and starlight, by pressing FN + CTRL + 1-7.

The Huntsman Mini, like other Razer devices, has an inbuilt memory that can hold up to five unique profiles. Razer Synapse allows users to store an unlimited amount of files in the cloud.

Why Not Razer Huntsman Mini

The price is high, $120 for clicking and $130 for linear. The Ducky One 2 Mini RGB can be got for roughly $140, while the less remarkable MOTO SPEED at $50. These days, you can get the Huntsman Tournament Edition for around $113, so you’re paying extra for the compact design. It may be worth it for enthusiasts or those already involved in Razer’s developing ecosystem of headphones, mouse, and audio solutions, given Razer’s reputation, quality Doubleshot PBT keycaps, and RGB.

Razer’s fans are the reason for its creation. Many people enjoy the sensation of linear optical switches, which are extremely fast for gaming and everyday use. The only reason 60% keyboard is that certain gamers, like a smaller footprint and some people with very basic setups, want something simple.

Using the Huntsman Mini for regular writing activities as someone less interested in games and more in business is also in consideration. Without extra keys, a huge amount of space is free, which can be a significant reason to buy it.

The Huntsman Mini stands out because it has many of the same gaming-specific features. These are better versions of Razer’s optical switches. As we’ve covered in previous assessments, Razer makes some claims about the benefits of these switches that we can’t back up with anecdotal evidence; we’d need specialized, esoteric technology to do so.

How WhatsApp messages can identify you