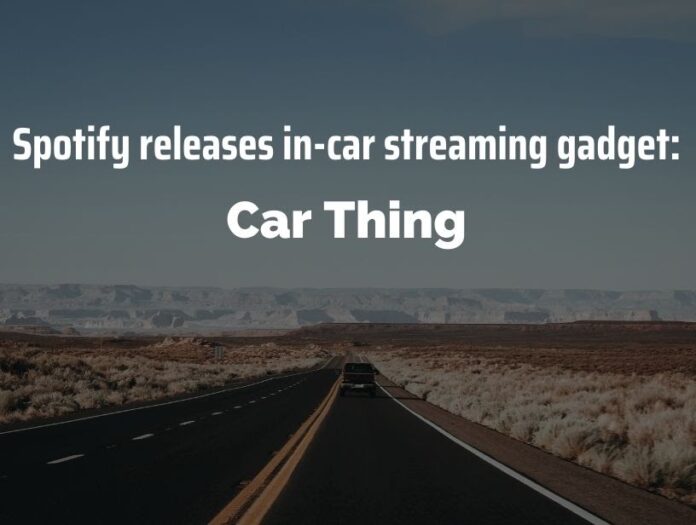 On 13  April 2021, Spotify officially debuted its first streaming gadget, an in-car entertainment system, ‘Car Thing’. It is launching in limited quantities in the US for its Spotify Premium subscribers but only on an invite-only basis. Spotify car thing will be available to users who are on the waitlist for its purchase.

Cars with Apple CarPlay or Android Auto compatibility don’t need this, however, created to provide a more personalized and a more seamless streaming in-car experience, Spotify stated that ‘Car Thing’ is intended to be a streaming solution for cars lacking robust infotainment. It is will simplify the user’s music streaming experience.

After connecting the streaming device with the user’s phone and the car’s audio system, ‘Car Thing’ will take the reins from there. It will give the user a quick tour of the gadget’s features.

Spotify’s first streaming gadget ‘Car Thing’ is a lightweight music and podcast player with a touchscreen, a solid knob for navigation, voice control features, and preset buttons to play the user’s favourite music, podcasts, or playlists.

Compatibility: It is a Bluetooth and an AUX or a USB cable compatible smart player.  It is compatible with phones with iOS 14 or Android 8 or above.

Accessories: It comes with 3 different types of mounts: a vent mount, a dashboard mount, and a CD player mount, along with a car charger and USB-C cable.

Voice Command: To make it easier, Car Thing can also be controlled by simply saying ‘Hey Spotify’. The users can skip songs, play a different playlist etc. through this command. Users can also make or receive calls, use navigation etc. even with live connection with phone. ​The music player will understand the user’s request effortlessly as it has four built-in microphones, with noise suppression capability. It also has an interference cancellation attribute to cancel out the traffic noise on the road along with other sounds.

Safety: The voice command feature is considered a great safety-focused attribute, users will not have to fiddle with the buttons or knobs while driving.

Spotify’s voice privacy page mentions it solely records and stores what users say after its “Hey Spotify” phrase is spoken. The information is helps to improve the feature over time.

The device is currently free in its limited release period. It is exclusively released in the US for Spotify Premium users. Customers on free trial of Premium will have to forfeit their remaining trial period to buy Car Thing. Selected users from the waitlist will only have to pay for the shipping since Spotify considers the device still in its experimental stage. The  future price of ‘Car Thing’ is can be $79.99 as per the market estimation. Spotify is giving out one Car Thing per subscriber, while supplies last.

Spotify has not disclosed the quantity of the Spotify car thing it will be releasing. So all the US Spotify Premium subscribers must start applying for the waitlist as soon as possible.

The device’s software will be regularly updated to make the experience more user friendly and allow the users to control more than just Spotify from the audio streaming device as cars will get smarter every year, said Andreas Cedborg, the head of hardware products at Spotify.

Since Spotify is the world’s biggest subscription music streaming service, the chances of its first hardware device being a huge success are very high. Spotify Premium subscribers with not-so-smart cars are likely to appreciate Spotify’s attempt towards personalized in-car music experience.