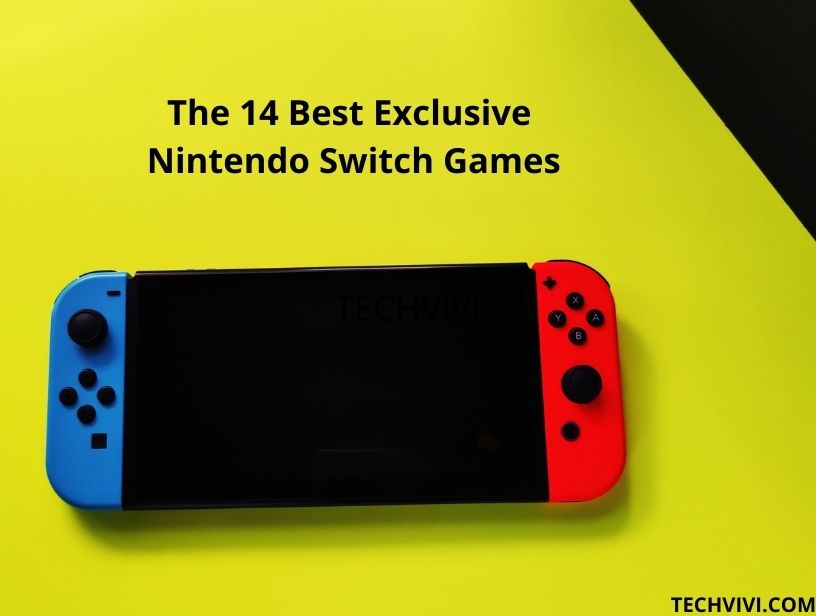 The Nintendo Switch is filled with amazing games, it’s hard to know where to begin. The console plays host to Nintendo’s usual franchise staples, with games that you can only play on the Nintendo Switch itself. In order to decide what game to play next, we’ve rounded up the best exclusive Nintendo Switch games. You can choose any of the following games you like-

1. Kirby and the Forgotten Land

Kirby is everyone’s favorite pink ball thing! This is a fully 3D adventure, Kirby explores abandoned worlds, and defeats evil beasts in a bid to rescue his friends. Kirby and the Forgotten Land is today brimming with classic Kirby charm, with a hilarious mechanic that lets Kirby become an assortment of objects like a light bulb, traffic cone, and car. It’s great to play in co-op, too.

2. WarioWare: Get It Together!

If you’ve never played a WarioWare game before, you are missing out on many things. It’s full of manic, fast-paced mini-games, hosted by Wario and his companions. This constantly brings something new to you. As is suitable for the series, Get It Together! has a wacky sense of humor and is perfect to play with a group of friends.

If you want an escape from the stress of the real world, dive into Animal Crossing: New Horizon, where you live on an island with anthropomorphic animals. Collect fossils for the museum, give gifts to your neighbors, relax with some fishing, decorate your home, and more. Just make sure to pay your rent to island owner Tom Nook.

The original Pokémon Snap landed on the Nintendo 64 back in 1999 (an old Pokémon game still worth playing). This sequel for the Switch was well worth the wait. This follows the formula of the first game; an on-rails experience where you progress through an island and take pictures of the abundance of Pokémon that live there. The Pokemon fans looking for a lighthearted game, New Pokémon Snap fulfills the criteria.

Super Smash Bros. This is the ultimate need of the version of this fighting franchise, with an incredible roster of gaming legends. Not in any other game can you pit Sonic against Samus, Pikachu against Pac-Man, or Mario against Mewtwo. This is easy to pick up and play. Though this is difficult to master, making for hours of endless fighting fun.

No issues if you’ve never played the previous Luigi’s Mansion games (though you really should) because this third entry for the Switch is perfect for newcomers. Players have to take control of Luigi in a haunted hotel, each floor offering a unique theme, sucking up ghosts and uncovering secrets as you aim to rescue Mario and his friends.

Mario has appeared in many games. There is a solid reason why the portly plumber is a gaming icon. But this series has never been better than in Super Mario Odyssey. This is an out-of-this-world 3D adventure that grants Mario special abilities in order to collect stars in the mysterious lands he explores.

When Ubisoft recently introduced the Rabbids, no one was sure about its popularity. The idea that they would end up in a game with Mario is bonkers. The Mario + Rabbids Kingdom Battle, a superb turn-based strategy game that mixes the inventiveness of the Mario franchise with the wackiness of the Rabbids.

9. The Legend of Zelda: Breath of the Wild

In The Legend of Zelda: Breath of the Wild, hero Link gives rise to a world he doesn’t recognize. In this game you must explore the land to regain his memories, solving puzzles and battling foes along the way.One should trust Nintendo to take up the open-world concept and produce something so masterful.

While Mario Kart 8 was initially released for the Wii U. Deluxe is the definitive version because it offers an improved battle mode and all the DLC. Beyond that expect all the traditional Mario Kart mayhem, with banana peels and shells flying across colorful courses. You can play championships offline, then take your skills online or race against friends locally.

Yoshi’s Crafted World is very charming. In this side-scrolling platformer, you play a very interesting green creature as you explore handmade-looking levels on your mission to repair the Sundream Stone. This game is a great solo, it really comes alive in co-op. It’s an amazing choice if you’re looking for something to play with a young gamer.

Splatoon 2 is the Nintendo take on the first-person shooter genre. Here the colored ink flies across arenas rather than bullets. The focus is multiplayer battles. One takes a humanoid form to spread the ink across the level and on other players, then morph into a squid to move through the ink. It’s frantic fun.

If you’ve ever thought of building your own Mario level, Super Mario Maker 2 turns that into a reality. You can create side-scrolling Mario levels. You can create this by using assets from a range of games in the series and then share them online for others to play. While there is also a decent single-player mode, the custom course building is really what makes this game shine.

Think of Nintendo Switch Sports as the Switch version of the classic Wii Sports. We present to you the six sports to get off your couch: volleyball, badminton, bowling, soccer, chambara (sword fighting), and tennis. Each sport supports multiple players, both offline and online, which makes Nintendo Switch Sports a perfect lighthearted party game.

There are so many games to keep you busy for a long time. All the genres and franchises are covered in this. Remember, most Switch games are available both digitally and physically, so you can download a game immediately if you’re desperate to begin playing.

Meta building AI that processes speech & text as humans do

Meta building AI that processes speech & text as humans do