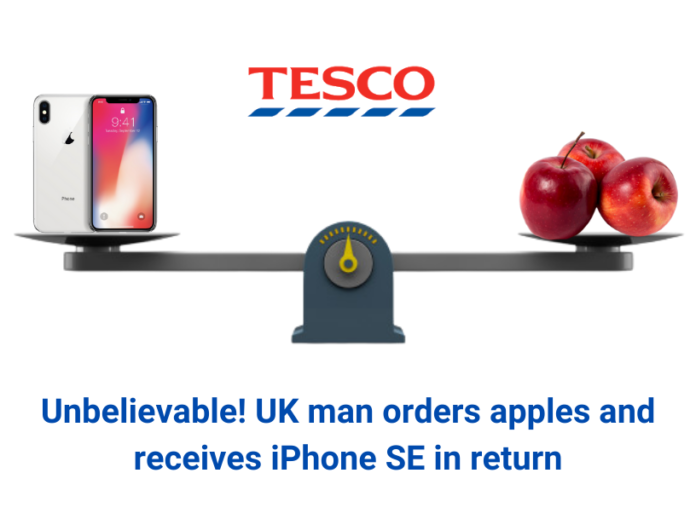 Online shopping is generally hassle-free but there is always a doubt that would the product be the same as portrayed online. We also hear some of the sad stories of getting something else instead of the product ordered. Here is a real life incident where a UK man gets iPhone. UK man, who ordered some fruits got an iPhone instead.

UK man orders apples and gets a new iPhone

Nick James, a UK man of 50, ordered some fruits online on Tesco’s website. When he went to collect his groceries at the nearest Tesco’s local store in Twickenham he was informed that he had received a surprise gift in his groceries. He was astonished to see that he received an iPhone SE box in his click and collect order. James tweeted that apparently they ordered apples and randomly got an Apple iPhone! Made my son’s week and informed that he also received the fruits. “I was half expecting the surprise to be an Easter egg or something – I was a little bit shocked, to say the least,” James told.

According to metro, this was a promotional campaign called a “super substitute”. Under the campaign Tesco surprised the click and collect member by hiding a brand new iPhone in their groceries. Winners are chosen at random. Tesco Mobile is giving away 80 items till April 18 at some of its stores to click and collect members. The supermarket chain said that Tesco Mobile’s ‘Super Subs’ has been created to show how amazing things can happen when the worlds of supermarket and mobile come together – all while putting a smile on shopper’s faces,” the supermarket chain said in a statement. This is a strategy where customers help to promote a product for you.

Super substitute is just a promotional campaign. Under which a particular company gives it’s product randomly to a person as a gift so that he promotes the product. It really benefits the company and also people are very excited to get gifts. Moreover, It is a better and efficient way to promote the products without wasting so much money on advertisement on social media or ad-films.