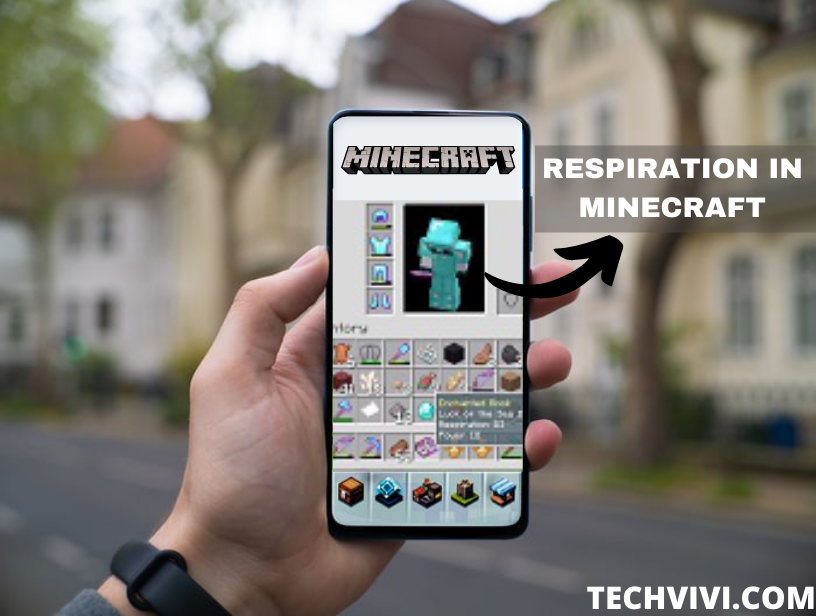 In Minecraft, if you have maxed out armor and tools then you have an incredible feat, but it takes a lot of time and effort to accomplish. All the enchantment is basically to help the player in the other aspect of their life in the entire Minecraft World including protection, attack, speed, and even breathing. When the thing regarding maximizing player’s armor is concerned respiration is one of the few enchantments players work hard to obtain for their helmet.

Here is an overview of, what does respiration does in Minecraft and why players are so driven to have it on their overpowered sets of armor.

What is respiration in Minecraft?

Minecraft’s respiration enchants help the player in breathing underwater. Without any enchantments or any of the potion effects, players in Minecraft can hold their breath for approximately 15 seconds, but just before running out of air and starting to drown.

It’s interesting to note that respiration enchantments work to elongate the amount of time that a player can stay submerged under the water before drowning, and the difference is astronomical.

What are the levels of respiration enchantments?

With the addition of the aqua affinity enchantment, respiration enchant can be furthered. This also helps players breathe underwater. Players can even add these enchantments onto a turtle shell helmet to maximize the effects. For achieving Respiration 3, an enchantment table will work, but most players find it easier to level up their armor by merging Respiration I and II books or enchants.

How important is the respiration enchantment?

The respiration enchantment is significant for players who want to spend time in the water. You can get it in handy when searching for shipwrecks, underwater sea temples, collecting blocks while submerged underwater, etc.

The respiration enchantment is needed to defeat a guardian sea temple. In this process, the player is completely submerged under the water and also is forced to attack a barricade of guardians in addition to the Elder Guardian.

Respiration is handy for players of Minecraft who have to collect masses of blocks like gravel, sand, and clay as the majority of these blocks spawn beside or under the water.

Prismarine, prismarine stairs, and sponge, and other blocks can only be found underwater. Collecting them is quite difficult without enchantment.

Top 5 most unique mobs in Minecraft

Mobs are an important element of Minecraft that adds more diversity to the game. They spawn naturally and also through spawners. Additionally, players can also generate mobs like iron golems. Different categories of mobs are: hostile, neutral, and passive. Those that will always attack the player are hostile mobs and passive mobs are their opposites. Neutral animals act aggressively in case the player provokes them.

These are the unique mobs in Minecraft

Mooshrooms mobs spawn in mushroom biomes. They are very rare. The brown variants in the brown mushrooms are generated only when a regular mooshroom is struck by a lightning bolt. A  small flower on a brown mooshroom, can be milked using a bowl to get suspicious stew.

A mysterious long mob that makes weird sounds and can be found in all dimensions. This mob is neutral and only attacks the player or other mob. Enderman is the most reliable source of ender pearls in Minecraft.

Goats may look like any usual neutral mob , but they can actually jump up to ten blocks high in the air. It is because of this reason Mojang has designed them to take ten health points (Five hearts in the game) less fall damage than other mobs. You can find them in mountain biomes.

A mob that looks like a snowman and helps in defending against other mobs. It does not spawn naturally. Players can create it by placing two snow blocks vertically and a Jack o’lantern on top. Do not create them in biomes with temperatures greater than one because there is a chnace they will melt there.

Jockeys are the rarest natural spawn mobs. They are present on top of another mob. There are 5 different joceky mobs in Minecraft : skeleton jockey, spider jockey, chicken jockey, strider jockey, and ravager jockey. Players need to kill one mob if they want to separate them.

How to install Minecraft Origins mod

There are nine origins in Minecraft Origins mod currently. These mods allow players to play as other entities.

The Enderian Origin let players to teleport farther and without pearls, but water causes damage to them. Also they are afraid of pumpkins.

The Merling Origin let players  breathe and see underwater. Also it break blocks as if the water wasn’t there. They help in increasing the swim speed and players will not sink. But  breathing underwater lasts a certain amount of time.

The Elytrian Origin provides elytra wings to players. They are launched in the air every 30 seconds. Double damage will be considered during flight. The Elytrian Origin only wear chain or lesser armor and takes more kinetic damage.

How to get Minecraft Bedrock PC free?